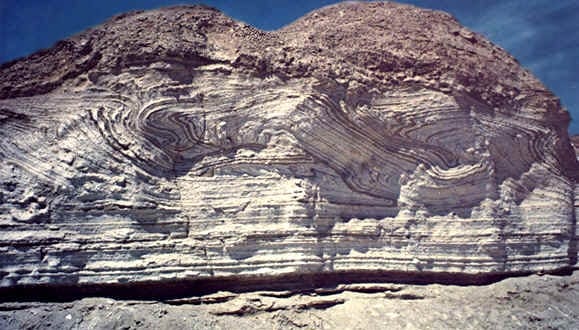 Ron found a road that had been cut through some of the whitish material and the freshly exposed interior of the material displayed a layering effect which swirled in such a manner as to make it obvious that these were more than geological layers. In searching the Bible for clues to their locations, Ron and his wife Mary Nell found scripture references that mention four of the cities as forming part of the boundaries of the Canaanites:

“And the border of the Canaanites was from Sidon, as thou comest to Gerar, unto Gaza; as thou goest, unto Sodom, and Gomorrah, and Admah, and Zeboim, even unto Lasha.” ……Genesis 10:19

It would be strange for Sodom, Gomorrah, Admah and Zeboim to each be listed as boundary markers if they were all in the same general location, at the south end of the Dead Sea. It is logical that the cities would be located at some distance from each other in order for it to be necessary to include each of them as boundary markers.

Ron’s location of the sites he had found were, indeed, scattered over a distance of over fifty or more miles. One of them was located North of Jericho which was in perfect accord with scripture which indicates that Zeboim would be located North of the Dead Sea.

Later in 1989, Ron and Mary Nell Wyatt visited the site just below Masada and took samples of the whitish material which broke right off in their hands and disintegrated into particles the consistency of talcum powder. At that time, Mary Nell actually found one of the brimstone capsules imbedded in a piece of compacted ash, however, no conclusion was drawn, at that time, as to what it was.

In October of 1990, Ron Wyatt and Richard Rives returned to area. As they examined the area below Masada they discovered that it had just rained. As they wandered through the area, Richard saw what looked like an open room or cave at some distance and as they approached the vicinity of the cave they came upon a very large chunk of ash that had just recently fallen from a high section – probably because of the recent rain. As Ron stopped to view this he saw numerous yellowish balls inside this broken ash, all surrounded by a reddish-black, crusty ring. Prying one out, he recognized it as sulfur. On closer examination, now knowing what to look for, it was found that all through the ashen remains were round balls of encapsulated sulfur (brimstone). After the discovery of the brimstone. Wyatt Archaeological Research began a study to see if brimstone was found in this form anywhere else.  Ron and Mary Nell Wyatt along with Richard Rives went to the Smithsonian Institute, in Washington D.C. and examined their display of sulfur in its various forms, none being rounded balls of powdered sulfur. In addition, none of them were encapsulated.  A request was granted by the Smithsonian that specimens other than those on display be examined.  This collection of sulfur from around the world, consisted of over fifty specimens.   None of them displayed the characteristics of the brimstone sulfur found in the vicinity of the “cities of the plain.” Ron Wyatt was not the first person to discover brimstone near the Dead Sea. When William Albright and Melvin Kyle set out to find the cities of Sodom and Gomorrah in 1924, they, too, found these pieces of brimstone at Southern end of the Dead Sea.

“…a region on which brimstone was rained will show brimstone. Well, it does; we picked up pure sulfur, in pieces as big as the end of my thumb. It is mixed with the marl of the mountains on the west side of the sea, and now is to be found scattered along the shore of the sea even on the east side, some four or five miles distant from the ledge that contains the stratum. It has somehow scattered far and wide over this plain.” “Explorations at Sodom” by Dr. Melvin Kyle, 1928, pp. 52-53.

Neither was Marvin Kyle the first to observe the ashen remains. The other record of these cities comes from Josephus in his “Wars of the Jews”, Book IV, Chapter VIII:

“Now this country is then so sadly burnt up, that nobody cares to come at it;… It was of old a most happy land, both for the fruits it bore and the riches of its cities, although it be now all burnt up. It is related how for the impiety of its inhabitants, it was burnt by lightning; in consequence of which there are still the remainders of that divine fire; and the traces (or shadows) of the five cities are still to be seen,…”

Josephus’ description perfectly describes what can be seen at these ashen sites:

The account of destruction of Sodom, Gomorrah and “all the plain” was not a fairy tale. It was an historical event that occurred exactly as the Biblical account presented it. Not only that, but the evidence remains, as Peter wrote, as an “ensample [a visual example] unto those that after should live ungodly”. They provide the entire world with the evidence of, as Jude wrote, “the vengeance of eternal fire.”

Bearing this in mind let us consider the writings of Malachi who wrote of the final reward of the wicked:

” …behold, the day cometh, that shall burn as an oven; and all the proud, yea, and all that do wickedly, shall be stubble: and the day that cometh shall burn them up, saith the LORD of hosts, that it shall leave them neither root nor branch.”

” But unto you that fear my name shall the Sun of righteousness arise with healing in his wings; and ye shall go forth, and grow up as calves of the stall. And ye shall tread down the wicked; for they shall be ashes under the soles of your feet in the day that I shall do this, saith the LORD of hosts.”

We are in the process of adding detailed scanning electron microscope data as well as complete elemental analysis of the material found in the rift valley between Israel and Jordan.

There are approximately 10 additional pages of information. This information will be added at a later date.