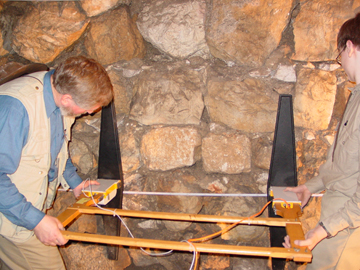 In February 2003 Wyatt Archaeological Research conducted ground penetrating radar scans at the exact location Ron had described as the entrance to the passageway of Jeremiah. The Radar scans revealed a void behind a man made wall, and the project to locate Jeremiah’s passageway began. Excavation permits were obtained from the Israel Antiquities Authority and an appeal was made for volunteers to participate. The response was overwhelming. Not only were there those who offered to physically assist with the work; but others who offered financial support and most importantly their support by way of prayer.

Among those who supported the efforts of Wyatt Archaeological Research, an international team consisting of thirty plus volunteers physically participated in a concerted effort to locate the passageway of Jeremiah.

The project began with the use of the latest technology in Subsurface Interface Radar, a device that can actually peer below the surface and see what lies beneath. Having located an anomaly below a man made wall, which matched that seen in previous radar scans, the work began in earnest. Excavation began down the face of the wall in an attempt to find some opening which might lead to Jeremiah’s passageway. This effort led to a dangerous and unexpected discovery that would alter excavation plans, the discovery of what appeared to be the walls foundation only a short distance below the surface. At that time, it was uncertain whether what had been discovered was truly a foundation, or the top of another wall. Once again radar was employed in an attempt to determine the nature of the discovery. After reviewing the data Israeli archaeologists called for extensive excavation; the removal of tons of material. The call presented a seemingly insurmountable task given the time constraints of the workers. The question arose; How could so much material be moved in such a short period of time?

The Wyatt team went to work. A ramp system was devised which would make it possible to transport stone, soil, and debris from the excavation site to wheelbarrows below; a system which would prove to greatly accelerate the dig. In an unprecedented effort, tons of material were removed in record time only to confirm that what had been revealed was indeed a foundation and not the top of another wall. After the walls’ foundation had been carefully and painstakingly cleaned, engineers were brought in to analyze the situation. Their conclusion cast serious doubt upon further excavation. The wall was in danger of collapse!

Excavation team members brought with them a wide range of talents; business men, medical doctors and nurses, those involved in the field of science, and those having expertise in the field of construction and construction materials. By divine appointment, it was no coincidence that the owner of one of the nations largest firms, involved with foundation support, was a participant in the excavations. Plans were presented to engineers and a concerted effort was launched to devise a method of shoring that would not only support the compromised wall but which would provide for a means of safely excavating under it.

A special meeting was called at Rockefeller Museum, home of the Israel Antiquities Authority; and after hours of extensive discussion and scientific calculation a shoring system was agreed upon which would allow the work to continue. While the excavation team made preparation, the search for wooden shoring material was underway; an expensive and not so simple task in Jerusalem, a city of predominately stone construction. After visits to multiple suppliers the materials were finally secured and within hours of delivery the first shoring frame was ready to be placed. In front of the subterranean wall a shelter was to be built from which the excavation could safely continue under its foundation. One by one team members positioned the shoring frames, while at the same time others carefully braced the wall with backfill and sand bags. Having re-secured the wall, the work could then proceed. Following the pathway of material that had been seen on radar, a tunnel was constructed under the foundation of the ancient wall. A pathway of loose stone and then soft soil was located, which supported Ron’s account. This was definitely an area that had been filled in at some time in the past. Probes into the material, and additional radar scans, indicated that we were on the right track.

Once again, safety concerns became a factor. It was determined by the engineers assigned to the project, that once the excavation extended past the walls’ foundation, which now served as a ceiling, the tremendous weight of the loose material above could collapse in on the excavations; a potentially deadly scenario.

In an effort to make an accurate determination of how much material rested above, a survey crew was called in to calculate the exact position and elevation of the Wyatt excavation in relationship to the ancient walls of Suleiman, and the Old City of Jerusalem which lay above. After locating a survey benchmark outside the Northern wall of Jerusalem, the position of the city above was superimposed on the excavation map. The survey led to a startling discovery. To everyone’s amazement, not only was the excavation about to extend beyond the wall below, but beyond the towering outer walls of Jerusalem, a scenario in perfect agreement with the account of Ron Wyatt. As the survey continued it was soon determined that more than 10 meters, some 40 feet of material, lay above the heads of the workers.

With the excavation schedule for the first phase of excavations nearing its end, it was agreed by all parties that the site should temporarily be secured. A decision which would not serve to end the project; but rather a new beginning, an essential step toward future success.

Reminded that Ron Wyatt worked for three and one half years before the realization of his efforts to locate the Ark of the Covenant, the Wyatt teams returns home with a sense of accomplishment and awaits another day for the key that will unlock the mystery of the cherub in Zedekiah’s cave, and the passageway that leads to the Ark of the Covenant.