Almost four thousand years ago, a cataclysmic event took place which literally changed the face of the earth. Approximately eight hundred square miles of the world’s most fertile and productive acreage was destroyed by the greatest and most devastating fire in earth’s recorded history. Turning the cities of Sodom and Gomorrah into ashes God condemned them with an overthrow, making them an example, or visual example, unto those that after should live ungodly;

Today the results of that devastating fire can plainly be seen throughout the Rift Valley of Israel and Jordan. Along the Western shores of the Dead Sea, the ashen remains of Sodom and Gomorrah bear witness of the ancient inferno which burned with FERVENT HEAT.

Join Richard Rives, president of Wyatt Archaeological Research, on an expedition through the plains of Israel and Jordan as the pages of Biblical history come alive.

The 80 page Book and 1 Hour DVD Documentary detailing the Biblical Record, Philosophical Criticism, The Discovery of Ash and Brimstone, Exploration in Israel and Jordan, Laboratory Analysis, Site Survey, and the Prophetic Significance. 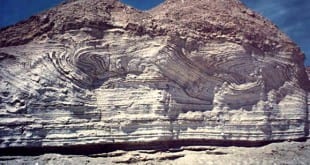