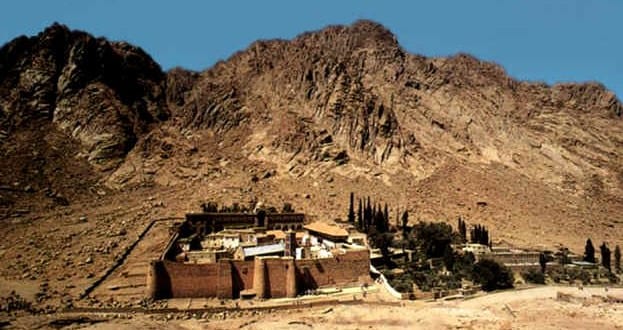 In the Sinai Peninsula?

The Area proclaimed by the mother of Constantine to be Mt. Sinai

The traditional location in the Sinai Peninsula didn’t “come into being” until almost 2,000 years after the Exodus:

“The origin of the present Monastery of Saint Catherine on the NW slope of Jebel Musa is traced back to A.D. 527, when Emperor Justinian established it on the site where Helena, mother of Constantine the Great, had erected a small church two centuries earlier.” (The Interpreter’s Dictionary of the Bible, 1962, p. 376.)

“There is no Jewish tradition of the geographical location of Mt. Sinai; it seems that its exact location was obscure already in the time of the monarchy….The Christian hermits and monks, mostly from Egypt, who settled in Southern Sinai from the second century C.E. on, made repeated efforts to identify the locality of the Exodus with actual places to which the believers could make their way as pilgrims. The identification of Mt. Sinai either with Jebel Sirbal near the oasis of Firan…,or with Jebel Musa, can be traced back as far as the fourth century C.E.”. (The Jewish Encyclopedia, Vol. 14, p. 1599.)

In 1761-1767, Von Haven, the member of a Danish expedition to the traditional site wrote, as reported in “Arabia Felix: The Danish Expedition of 1971-1767, by Thorkild Hansen:

“I have observed earlier that we could not possibly be at Mount Sinai. The monastery [of St. Catherine] was situated in a narrow valley, which was not even large enough for a medium-sized army to be able to camp in, let alone the 600,000 men that Moses had with him, who, together with their wives and children, must have come to over 3,000,000.”

The fact is clear that the Sinai Peninsula was always considered to be Egyptian territory. There is an abundance of evidence that the Egyptians controlled the Sinai Peninsula during the time of the Exodus because of their mining operations there. This archaeological evidence is still present and evident today. The peninsula today doesn’t even have any population to speak of except those who live around the few oases, many of which today contain the gasoline stations for travelers.

In “Arabia and the Bible” by James Montgomery, we read on p. 31: “…the land west of a line from the Wady of Egypt to the Elanitic Gulf [Gulf of Aqaba] has always belonged to the Egyptian political sphere, and actually that is the present boundary of Egypt….the South-Arabians called the same region Msr, i.e. Misraim, Egypt.”