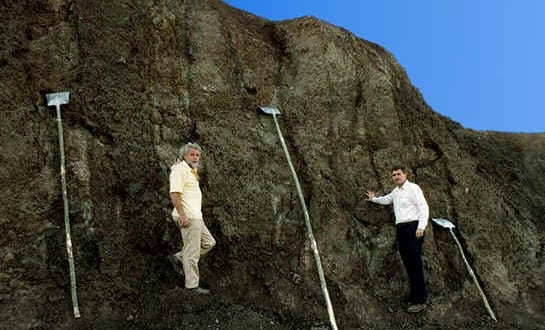 Ron Wyatt and Richard Rives performed what has become known as the “mini-excavation” on “Noah’s Ark”. Shovels were sharpened and the blades bent to form a crude “giant razor”. They simply cleaned one badly eroding section in an area believed by the Turkish Government to be “rib timbers”. Being very careful not to remove more than just a minute amount of dirt, they soon could see the color difference in the lighter rib timbers as contrasted against the darker soil. The whole process was videotaped. The rib timbers were found to be fragmented and to be held in place by the surrounding material. The INTERNAL structure members are in a much better state simply because they have not been exposed to the elements. On the east side of the ark is a section in which the “rib timbers” are exposed but have NOT completely fallen away. These “rib timbers” are fractured, having suffered from “frost wedging”. Even though the ribs are in a fragmented state, they are still held in place by the soil. The ” ribs” were able to be seen due to the color difference between the soil and themselves.