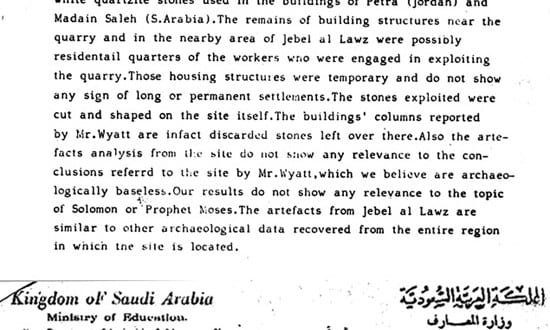 The Discovery by Larry Williams and Bob Cornuke

A few months after his return home, Ron flew to Dallas and met with Col. James Irwin, whom he had become acquainted with several years earlier. Ron liked Col. Irwin and found him to be not only a man of integrity, but someone who was willing to help others. Ron told him about the evidences at Jebel el Lawz and asked if he would be interested in “joining forces” on the project. Col. Irwin had connections in the Jordanian government and Ron thought perhaps he could gain entry. He told Ron he would see what he could do to help him.

May and Oct. 1986- Col. Irwin wrote the Jordanians and the Saudis in an attempt to arrange permission to explore and excavate.

On May 18, 1986, Col. Irwin wrote the Jordanian Dept. of Antiquities and on Oct. 15, 1986, he wrote to the Saudi Department of Antiquities and Museums, both on Ron’s behalf. He sent the replies to Ron, both of which mention “Mr. Wyatt” in their responses and prove that Col. Irwin had true intentions to help Ron, not “take over” the project. But his efforts were in vain- he was unable to gain entry into Saudi. The following quote is from an update in Col. Irwin’s “High Flight” newsletter, written by then vice-president of High Flight, Bob Cornuke. It made the following statement about a trip they made in June 1988:

“Great news! We strongly feel that the real Mt. Sinai has been discovered…. Larry Williams and I have taken two trips to Saudi Arabia and traveled to Jebel Al Lawz. This mountain is believed by some Bible scholars to possibly be the real Mt. Sinai….” Larry Williams wrote “The Mountain of Moses”, published by Wynwood Press, New York, which detailed his and Cornuke’s “adventures” searching for Mount Sinai in Saudi Arabia. He gives details as to WHY they went to that particular location and HOW they got there. For those who wish to check out his account, his book’s ISBN number is 0-922066-45-0.

The statement that seems to bother people the most is the one that has been made about Mr. Cornuke’s “discovery” of the real Mount Sinai, which goes something like, “Armed only with the Bible as his guidebook,….”

David Fasold told me personally in a telephone conversation, that he had given Larry Williams detailed written directions with landmarks as to how to get to the exact site at Jebel el Lawz coming from Tabuk. Larry Williams confirmed Mr. Fasold’s claim, and plainly stated how they found the mountain:

“…by six we were on the road, following David Fasold’s instructions and my topographical map…. According to David’s instructions, we should find a turnoff four kilometers past the gas station… (p. 151)

“We attempted to follow David’s meticulous instructions to the letter….(p. 152)

“…we asked these people how to find Ibraham Frich, the local Beduoin who tends most of the sheep in this great valley…. We wanted to see Frich for 2 reasons. First we wanted to tell him hello from David and to give him some things we had bought for him in town that we thought perhaps he would like. Second, David had told us that Frich’s camp was right at the base of Jabal al Lawz, so we would not have to ask where the mountain was… (p. 153)

The section of his book telling about how they arrived at the site is dotted with numerous references to the directions given them by Mr. Fasold.

Larry Williams’ statement of “why” they went to Jebel el Lawz

Early in his book, Mr. Williams makes the following statement as to how he became interested in going to Jabel al Lawz:

“Jim [Irwin] was kind enough to give me a copy of a letter written to him by someone who has since become a good friend of mine, David Fasold. Dave, and one of his acquaintances, Ron Wyatt, had penetrated the borders of Saudi Arabia to go to a mountain which, based on the information in Dave’s letter, could only be the true mountain of God. The problem was that Dave, like ourselves, had been apprehended by the police and held in jail for eight days, so he came back empty-handed. While this was Dave’s first time in jail in Saudi Arabia, it was Ron’s second time, the first time having lasted seventy-eight days.”

Although Mr. Williams admits Ron had been there twice while Mr. Fasold had only been there once, he was careful to avoid giving Ron the credit for the discovery. On page 140 of his book, Larry Williams writes:

“Twice already our potential site had proven difficult to document. My friend David Fasold and Ron Wyatt stumbled across the site which Fasold validated. About a year earlier, Wyatt, by himself, tried to get to the site. In both instances, they ended up in jail and were not able to leave without any evidence, other than their stories, as to what lay at the foot of the mountain.

Ron had not “tried” to get to the site earlier,-he had been there and seen the evidence. How could Ron have led them there in 1985 if he had not been there in 1984? Ron and Mr. Fasold did not “stumble across” the site- they returned to the exact site Ron had seen earlier and which he had determinedly believed was the best candidate for Mount Sinai based on his years of careful study and research.

Ron took David Fasold to Noah’s Ark 8 years after Ron had begun research on the site, and they then continued on to Jebel el Lawz on the same trip in March/April 1985. This was just a few months after Mr. Fasold had first called Ron. Mr. Fasold knew nothing about Ron’s research or the site until he was invited to come along while on that trip.

In summary, Ron Wyatt found Mount Sinai at Jebel el Lawz in 1984. David Fasold happened to be with him when he returned to the site in 1985. Mr. Cornuke and Mr. Williams found it again in 1988 by following the written instructions of Mr. Fasold.