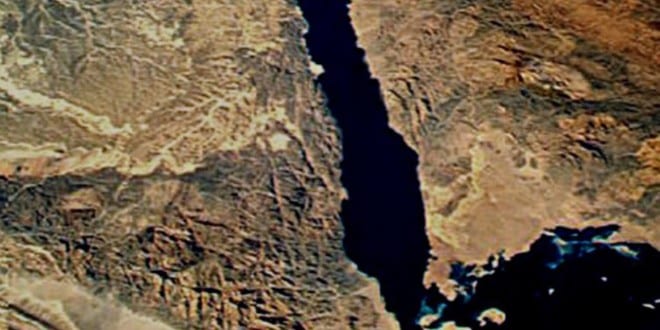 (First published in newsletter # 2 in 1993)
There has been much controversy through the years over “which” Red Sea is being referred to in the Exodus account. You will see here, that “Red Sea” is used to refer to all section of that sea– the main body, the Gulf of Suez and the Gulf of Aqaba.

If you will get a large map of Egypt, you will note that the Red Sea is quite large– beginning at Ethiopia on the southwest and Yemen on the southeast. It separates northern Africa from Arabia. At its northern end, it splits into 2 arms- the Gulf of Suez and the Gulf of Aqaba.

Let’s go to the first reference to the Red Sea in the Bible– the plague of the locusts had covered all the land of Egypt. If you go the map, you will see that Egypt extended far south of the Suez arm of the Red Sea. Thebes, the ancient capital of Egypt, lay a good 150 miles south of the beginning of the Gulf of Suez (as the crow flies.) Now, these locusts were in all the “coasts” of Egypt, including Thebes and beyond.

EXO 10:19 And the LORD turned a mighty strong west wind, which took away the locusts, and cast them into the Red sea; there remained not one locust in all the coasts of Egypt.

A west wind, blowing the locusts into the “Red Sea”, would blow them into the main body of the sea and the Gulf of Suez.

The second reference is:

EXO 13:18 But God led the people about, through the way of the wilderness of the Red sea: and the children of Israel went up harnessed out of the land of Egypt.

This “wilderness” was the land between the 2 arms of the Red Sea.

Now, we will go to a scripture concerning Solomon’s navy:

1KI 9:26 And king Solomon made a navy of ships in Eziongeber, which is beside Eloth, on the shore of the Red sea, in the land of Edom.

This reference is definitively speaking of the Gulf of Aqaba, because we know where Eloth (Eilat) was. And this is the same Red Sea that Moses led the great multitude across.

The Red Sea of Moses’ day was the same Red Sea we know today– the main body of the lower Red Sea, the Gulf of Suez and the Gulf of Aqaba.

Again, we can only marvel at how the Lord has preserved these sites throughout history. If the true location had been known all along, there would be no evidence left. We live in a time when people simply don’t believe the Red Sea crossing ever really happened, and God tells us that He knew that time would come:

JER 16:14 Therefore, behold, the days come, saith the LORD, that it shall no more be said, The LORD liveth, that brought up the children of Israel out of the land of Egypt;

But He does “liveth”, and before its all over with, He will vindicate His Word to the world.