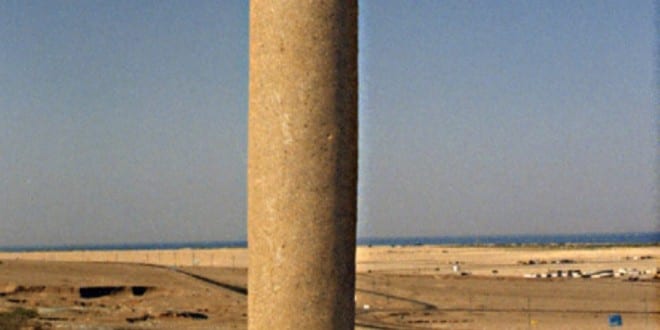 The Column on the Beach

(First published in newsletter # 2 in 1993)
In 1978, when I first visited the beach area [in Egypt] with my two sons, we found a Phoenician-style column lying on the southern end of the beach. Partially in the water, the inscriptions had been eroded away, or possibly they were purposefully chiselled away. We found this during the time that Israel was occupying the Sinai, and we pointed it out to the soldiers who were patrolling the beach. The next time we returned, we found they had moved it across the road and set it up in concrete.

We didn’t fully understand the importance of this column until a few years later– we did recognize that it was definitely not of Egyptian style. But in 1984, when we were imprisoned in Saudi Arabia, our captors, in an effort to verify our story that we believed Mt. Sinai was there and that “Musa” (Moses) led the people across the sea to their country, had me take them to the beach where they arrived after passing through the sea. I directed them to the spot in a helicopter. Landing here, I found another column–identical to the one on the opposite shore– except this one had the inscriptions intact. Noting carefully the Phoenician (Archaic Hebrew) letters, we were later able to have it translated. It contained the words: Mizraim (Egypt); Solomon; Edom; death; pharaoh; Moses; and Yahweh. From this, we knew that King Solomon had erected these columns in honor of Yahweh and dedicated them to the miracle of the crossing of the sea. And, that column possibly saved my sons’ and my lives– it proved what I had been telling my Saudi jailers!

This year, we discovered that the Saudis have removed the column on their beach from its original location– they have sunk a large marker in concrete where it was located– and we are trying to locate it in their Antiquities files. But we have documented the solitary marker, sunk into the ground in concrete, on the beach, just down from the remains of the ancient fortress we believe was Baalzephon. We will study the sites on the Mt. Sinai side of the gulf later this year.