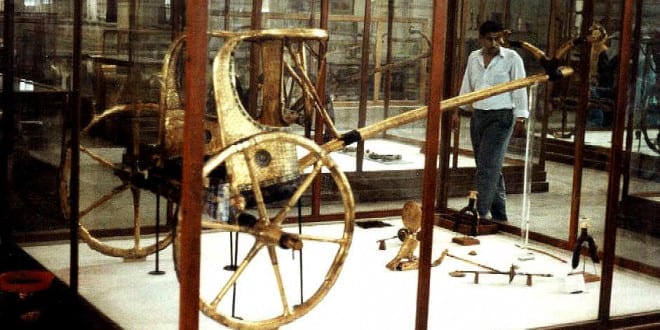 Significance of the Wheels

The significance of the wheels is of extreme importance to the dating of the Exodus and determining which dynasty was involved. Back in the late 70’s, Ron actually retrieved a hub of a wheel which had the remains of 8 spokes radiating outward from it. He took this to Cairo, to the office of Nassif Mohammed Hassan, the director of Antiquities whom Ron had been working with. Mr. Hassan examined it and immediately pronounced it to be of the 18th Dynasty of ancient Egypt.

When Ron asked him how he knew this so readily, Mr. Hassan explained that the 8-spoked wheel was only used during the 18th Dynasty.

This certainly narrowed the date. Researching the Egyptian chariot Ron soon discovered that the fact that he found 4, 6 and 8 spoked wheels, in the Red Sea, places the Exodus in the 18th Dynasty according to numerous sources.

“Egyptian literary references to chariots occur as early as the reigns of Kamose, the 17th Dynasty king who took the first steps in freeing Egypt from the Hyksos, and Ahmose, the founder of the 18th Dynasty. Pictorial representations, however, do not appear until slightly later in the 18th Dynasty….” (From “Observations on the Evolving Chariot Wheel in the 18th Dynasty” by James K. Hoffmeier, JARCE #13, 1976)

For more information on the chariots of the Egyptian army, let’s go to the Biblical account, when Pharaoh and his army go after the multitude:

“And he made ready his chariot, and took his people with him: And he took six hundred chosen chariots, and all the chariots of Egypt, and captains over every one of them.”

This verse makes it quite clear that the Pharaoh took every chariot in Egypt – his own, his generals (or “Captains”) and a group called his “chosen” chariots, which seem to be in addition to his regular army (“all the chariots of Egypt”). We have continued extensive research on this subject and obtained some new data which indicates that the site of the crossing of the Red Sea was actually broader and shallower than earlier data indicated. New interest in the Gulf of Aqaba has been generated due to the new cooperation between Jordan, Egypt and Israel in promoting tourism in the region. (The gulf is bound by Egypt on the west, Israel and Jordan on the north, and Saudi Arabia on the east.)

Tension in the region between the Saudis, Jordanians, Egyptians and Israelis has resulted in a very limited knowledge of the sea floor of the Gulf. Of particular interest is the fact that they are planning an extensive program of scientific research in the gulf, because, “…we still lack basic oceanographic information about the Gulf”, Limnological Research Institute”.

“Soundings” and measurements taken to date have been admittedly inaccurate because of many factors – but foremost is the fact that it is deep but narrow (30 km. at the widest point.)

Wyatt Archaeological Research contacted every oceanographic institute which could be found, seeking the most recent and accurate information. Data was provided from the ETOP05 data base which is supposed to be the most accurate available. However, it isn’t as detailed as we would eventually like. (Refer to “Data announcement 88-MGG-02, Digital relief of the Surface of the Earth. NOAA, National Geophysical Data Center, Boulder, Colorado.)

What it DOES show is a swatch of sea floor from Nuweiba across to the Saudi shore, which is much shallower than the sea on either side of the underwater land bridge. This swatch of sea floor is roughly between 7 and 10 miles wide. On either side, large cracks in the earth extend down to almost 3,000 feet to the north, and 5,000 to the south. This new information is quite exciting, because it shows a consistent pathway across the gulf to the other shore that, with the water removed, could have easily been traveled. When the digital data was fed to a topographical mapping program, it revealed a 3-D model of the sea floor in the Gulf. That digital model can be seen below.