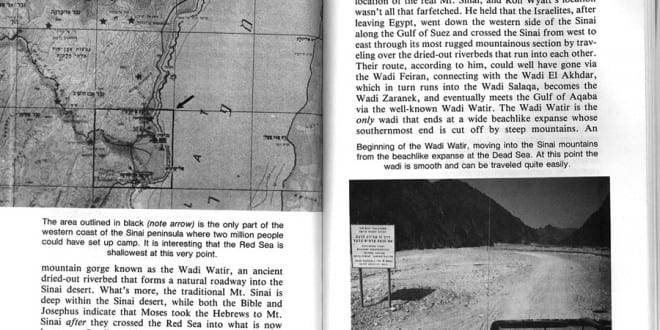 To provide some background, in 1978, Ron and his 2 sons had found several remains of ancient Egyptian chariots in the finger of the Red Sea known as the Gulf of Aqaba. With the discovery of the location of the Red Sea crossing site, Ron knew that Mount Sinai had to be in NW Saudi Arabia, on the opposite shore. He studied maps of the region and determined that the mountain that appeared to be the best candidate for Mount Sinai was Jebel el Lawz.

Ron told journalist, Rene Noorbergen, about these remains and explained to him that he believed these marked the location of the Red Sea crossing site and further explained his belief that Mount Sinai was most likely Jebel el Lawz.

Mr. Noorbergen wrote a detailed explanation of Ron’s theory in his book, “Treasures of the Lost Races”, published by The Bobs-Merrill Co., Inc., Indianapolis/New York, copyright 1982. The following are some quotes from pages 163-165:

“The theory on which Ron Wyatt was basing his exploratory trip into the Middle East was founded on two very obvious points made by Flavius Josephus and recorded in the Bible….Wyatt reasoned therefore that the Israelites had crossed the Sinai from west to east and had finally reached an area on the eastern coast (Gulf of Aqaba) where the mountain range met the sea…. Interestingly, not far from the opposite shore is a mountain known as Jebel el Lawz, a steep, forbidding peak. Is it perhaps possible that this is the Mt. Sinai that Moses speaks of? There are many different theories regarding the possible location of the real Mount Sinai, and Ron Wyatt’s location wasn’t all that farfetched…. ” Ron wanted to explore the area around the base of Jebel el Lawz to look for evidence and applied for a visa to visit Saudi Arabia. For 4 years he continued to apply but never received any acknowledgment at all.

December 1983- Ron Wyatt and sons enter Saudi without a visa

Finally, in Dec. 1983, he made the decision to try to enter the Saudi without a visa across the Jordanian border and go to Jebel el Lawz. He and his 2 sons crossed the border and managed to get transportation to the mountain. There, he saw the evidences which convinced him it was the true Mount Sinai. Unfortunately, he and his sons were arrested as they were returning to the border to cross back into Jordan. They were charged with being Israeli spies and held for 78 days. All their film and 8mm movies were confiscated. Ron saw enough evidence to absolutely convince him of the accuracy of the site, but he had nothing to prove it.

April 1984- Ron and his sons are released from Saudi prison

Upon their release in April of 1984, Bill Kurtis interviewed them on CBS Morning News the day after their return to the U.S. and Ron told about Jebel el Lawz. Portions of this interview can be seen on both our “Presentation of Discoveries” and our “Discovered- the Exodus” videos.

A few months after his return home, in the summer of 1984, a Bedouin prince from Tabuk (the nearest town to Jebel el Lawz) called Ron and asked to come to the U.S. and meet with Ron. Samran el Mutairy flew to Nashville and explained that he had learned about Ron’s claim that Jebel el Lawz was the true Mount Sinai AFTER Ron had been released.

He went on to explain that the information that had been related to him by some of Ron’s interrogators had convinced him that there was a good possibility that there “was something” to his theory. He then asked Ron to return to Saudi as his official guest and take him to the mountain and show him the evidences. Ron told him he would consider it, but in light of his recent imprisonment there, he was not overanxious to return.

March 1985- Ron takes the Saudi Bedouin prince to see the site he believed was Noah’s Ark in Turkey. Mr. David Fasold accompanies them.

In early 1985, Ron was contacted by David Fasold. Mr. Fasold had called Col. Jim Irwin (the former astronaut) and told him he wanted to search for the ark in the lava flows at the foot of Mount Ararat using radar because he didn’t believe a ship could have survived on a volcanic mountain. Col. Irwin referred him to Ron because Col. Irwin was dedicated to searching on the mountain and was not interested in the project Mr. Fasold proposed.

Mr. Fasold then called Ron. When Ron told him about the “boat-shaped” site, Mr. Fasold wanted to go to see it as soon as possible. Ron agreed to go in late March of 1985.

Ron invited Samran, the Saudi Bedouin prince, to join them in Turkey and go along to see Noah’s Ark, as Samran had expressed interested in seeing it.

After they went to the “boat-shaped” site, Samran was very excited and had even more confidence in Ron’s claim about Jebel el Lawz after seeing the evidences for Noah’s Ark. He then persuaded Ron to return with him to Saudi and go to the mountain. Mr. Fasold was also invited although Ron had not discussed Mount Sinai with him. After his experience in prison in Saudi a matter of months earlier, Ron was happy when Mr. Fasold agreed to go since all expenses were paid by Samran.

They all three flew to Saudi and went to Samran’s home in Tabuk. Samran arranged for a large work crew to go to the mountain with them. Although the location of Jebel el Lawz was known by Samran, the area is extremely large and only Ron knew where he had found the archaeological remains.

When they arrived in the general area of Jebel el Lawz, Ron was able to pinpoint the location he had seen the remains at the year before. They explored the entire area and archaeological remains extensively, photographing and videoing everything. They even did some limited excavation.

But when they were ready to leave, just as feared, they were placed under house arrest and all their film and video was confiscated. The Saudis had brought in an archaeologist who verified the remains and it was deemed necessary ( by someone higher up) to keep the information confidential.

Ron again had no photos or documentation to show others what he had found there.

Continue to THE “DISCOVERY” BY LARRY WILLIAMS AND BOB CORNUKE…