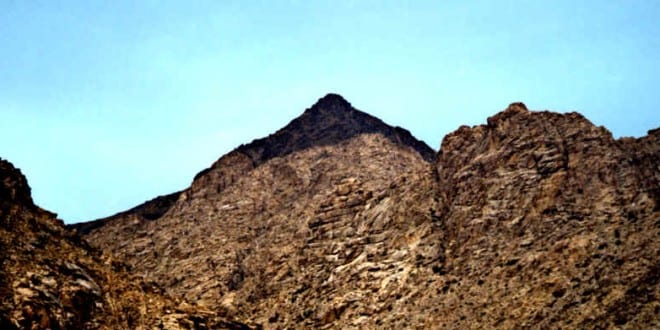 Ron made a decision to enter Saudi without legal permission.

Ron and his sons arrived in Jordan – they had applied and received a Jordanian visa prior to leaving the U.S. They toured Jordan a bit and then parked their rental car near the border and walked into Saudi undetected.

Hitchhiking and hiring taxis, they arrived near Jebel el Lawz, where Ron saw white pillars lying on the ground, the sun reflecting off the white stone.

MARBLE COLUMNS NEAR THE ALTAR

“Twelve Pillars According to the Twelve Tribes of Israel”

And Moses wrote all the words of the LORD, and rose up early in the morning, and builded an altar under the hill, and twelve pillars, according to the twelve tribes of Israel.

Ron believed that these were pieces of a “shrine” that had once sat near the altar. There were at least 10 pieces of broken, round columns almost 23 inches in diameter. They varied in height from 8 inches to 26 inches.

In addition, there were a large number of rectangular marble stones 8 1/4 inches by 16 ½ inches, from 10 to 26 inches long. These pieces were found around the altar, while others lay scattered at a greater distance, and are not included in our count. He believed this had to be the site of Mt. Sinai and he saw the entire top of the mountain to be blackened as if charred. He noted several features of the site which identified the area.

As Ron surveyed the region around the mountain, he saw that here was an area that perfectly fit the description of Mt. Sinai (Horeb) – there were thousands of acres of land surrounded by a mountain range which enclosed the area. He was convinced that this was it! But as they got nearer the base of the mountain, a small truck pulled up and the man inside brusquely told Ron and the boys’ driver to take them back to where their taxi was waiting for them, which he did. They then got back into this taxi and headed to the Jordanian border.

When they arrived at the border, things didn’t go so well. As they attempted to exit the country, they were abruptly arrested and taken to a jail in Hagl. They were being charged with espionage.

Ron and the boys were separately questioned day after day by a group called the Interrogation Team. They each told their story – of their belief and reasons for that belief, that Mt. Sinai was Jebel el Lawz. One Saudi official, Abu Collet, sent men out to the mountain to determine if any evidence was actually there, but the men came back with a negative report, which was sent to the King.

There were some among the interrogators, however, who believed Ron. One day three Saudis took Ron on a trip in a helicopter to the shore of the Gulf of Aqaba where Ron claimed the great multitude had crossed the sea. The helicopter landed on the beach directly opposite Nuweiba, Egypt. It wasn’t too difficult to find the right area because Nuweiba is easily seen across the 8 mile gulf.  Landing there, on the beach they found a Phoenician-style, granite column erected on the shore, with inscriptions in archaic Hebrew. The Saudis took numerous photographs of this column, and Ron suddenly had a little more credibility with his jailers. Archaic Hebrew simply isn’t found in Saudi Arabia and here was some very concrete evidence. In fact, it is possible that this column literally saved Ron and the boys’ lives. No one in Saudi had known about the column as it was in an extremely remote, uninhabited area. But even this column didn’t insure their release. However, it did match the column Ron had found in 1978 on the opposite shore in Egypt – only this one had the inscriptions on it!

Only upon their release, after 75 days, did they learn that a man whom Ron had told of his plans to enter Saudi illegally, had called the Saudi embassy and told them that the Wyatts were actually Israeli spies. The Saudis told Ron this man’s name when they were released.