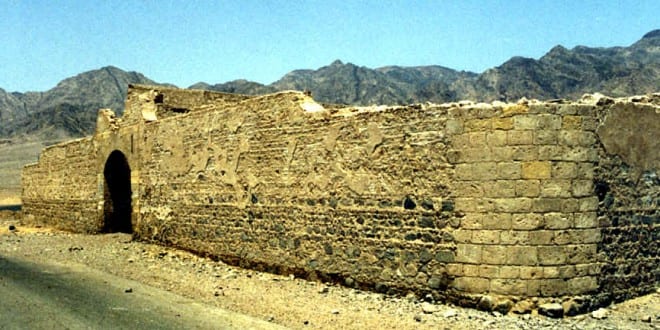 “Speak unto the children of Israel, that they turn and encamp before Pihahiroth, between Migdol and the sea, over against Baalzephon: before it shall ye encamp by the sea.”

When God gave Moses these instructions, it is evident that Moses knew where these places were – he was familiar with the land.

On the north end of the beach area, there are the remains of an ancient Egyptian fortress, which would have prevented their going north when they entered the area. This fortress was another evidence that Egyptian territory extended all the way through the Sinai peninsula.

As they were in between Migdol and the sea, Migdol could either be the mountains to the west, which make a perfect barrier, enclosing them on the beach – or it may have been a watch-tower which set on top of one of those mountains.

The Egyptians did have watch-posts all through the Sinai Peninsula, and most likely would have had one here, to keep an eye on ships coming up the Gulf of Aqaba.

It is historically documented that they flashed messages from watch-tower to watch-tower using reflected sunlight by day and fire by night. In fact, that may well be how pharaoh knew exactly where Moses and the people had gone.

On the opposite shore, in Saudi Arabia, exactly across from where they entered the sea, is another ancient structure. All alone on the beach, it may have been a Midianite fortress, dedicated to Baal; we believe this was Baalzephon. The phrase “over against” seems to mean “opposite of” in respect to being across a body of water

The question has been asked: “Isn’t this site for the crossing too far? Wouldn’t it have taken them a long time to get there?” Well, in 1967, Moshe Dyan marched his troops from Nuweiba (the crossing site) to Suez City (near ancient Tharu/Succoth) in six days. And they camped at night.

The Israelites were told to use only unleavened bread for seven days – indicating that they would be traveling quite briskly without time to camp for seven days.

” Seven days thou shalt eat unleavened bread, and in the seventh day shall be a feast to the LORD. And thou shalt shew thy son in that day, saying, This is done because of that which the LORD did unto me when I came forth out of Egypt.”

The Israelites didn’t stop and encamp every night, as Moshe Dyan’s troops did – they traveled both day and night:

” And the LORD went before them by day in a pillar of a cloud, to lead them the way; and by night in a pillar of fire, to give them light; to go by day and night:”

With the Divine assistance of the Lord, this massive wave of people traveled in an orderly fashion both day and night, with great speed:

” Ye have seen what I did unto the Egyptians, and how I bare you on eagles’ wings, and brought you unto myself.”

In scripture the eagle is used to denote speed: In 1978, when Ron first visited the beach area with his two sons, they found a Phoenician-style column lying on the southern end of the beach. Partially in the water, the inscriptions had been eroded away, or possibly they were purposefully chiseled away. He found this during the time that Israel was occupying the Sinai, and we pointed it out to the soldiers who were patrolling the beach. The next time he returned, he found they had moved it across the road and set it up in concrete.

Based on an inscription, later found on a matching column on the other side of the crossing, Ron believed that King Solomon had erected these columns in honor of Yahweh and dedicated them to the miracle of the crossing of the sea.