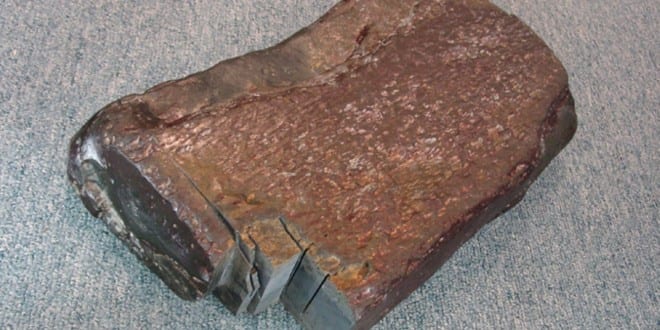 Over the past fifteen years the Turkish government, through the Noah’s Ark Commission, has cooperated with Ron Wyatt on obtaining and evaluating structural specimens from Noah’s Ark. One of these specimens was a piece of fossilized deck planking, which many of you have seen on the up- dated Noah’s Ark videos. The most recent news in regards to this specimen is that thin sections have been cut from this deck timber for microscopic examination. As you can see in the photo that we have provided below, a corner section was cut out from this incredibly hard fossilized deck timber.

The Aramaic root word for the Hebrew word “gopher wood” means laminated wood (this is when layers of wooden boards are glued together one upon another to provide extra strength), and when these cuts were completed, it was plainly evident that at least this portion of the deck planking is laminated wood!

The excess of the cementing substance (the “glue” used was resin, which was made from tree sap) was squeezed out the end of the plank, hardened, and has remained in the fossilized form. Until this cut was made, it was merely assumed that the dripping material along the outer edge was the pitch placed on the outer surfaces of the deck timbers and the rest of the boat. But now the amazing fact has come to light that the construction methods used by Noah to build the ark included laminating. Further documentation will appear in an up-dated version of the book “Discovered: Noah’s Ark,” and in the up-coming video that we will release on Noah’s Ark.