Breaking News
Home » PYRAMID BUILDING » How The Pyramids Were Built 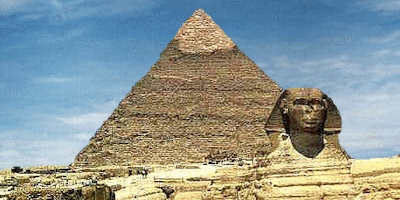 How The Pyramids Were Built There is only one known written explanation of how the ancient Egyptians built the pyramids. Because it was written so many years after the age of the pyramids, few historians or archaeologists have given it much attention. Herodotus of Asia Minor, (d. 425 B.C.) traveled extensively in Egypt, collecting the verbal history of this most ancient nation. In writing about the construction of these pyramids, he stated:
“The method employed was to build it in steps, or, as some call them, tiers or terraces. When the base was complete, the blocks for the first tier above it were lifted from ground level by contrivances made of short timbers; on this first tier there was another, which raised the blocks a stage higher, then yet another which raised them higher still. Each tier, or story, had its set of levers, or it made be that they used the same one, which, being easy to carry, they shifted up from stage to stage as soon as its load was dropped into place…. The finishing-off of the pyramid was begun at the top and continued downwards, ending with the lowest parts nearest the ground.”

The “contrivance” used in the lifting of the enormous blocks of the pyramids is now understood. It has been thoroughly tested and examined by engineers who agree that such a “lift-device” is capable of lifting stones in excess of 100,000 pounds, when constructed in large enough dimensions.

Ron Wyatt, basing his design on the description of Herodotus, constructed machines, made of wood, that easily lift heavy objects.