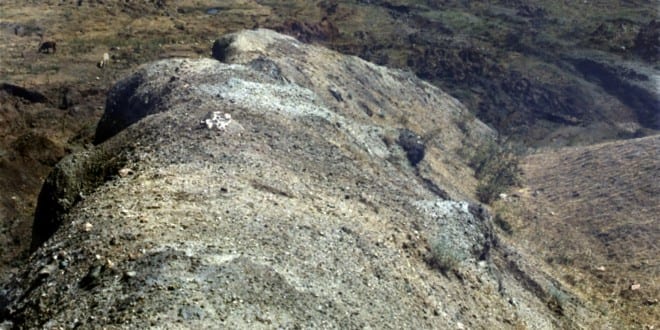 In 1985 a six-inch hole was drilled into the side of the ark. By way of that hole, matrix material samples were taken from within a cavity. Careful examination of the samples with the naked eye revealed fibers that appeared to be hair. Recently these fibers were evaluated by a fiber expert in one of the nations leading crime labs.

Under microscopic evaluation using both white and crossed polars light, the fibers revealed all of the features characteristic of mammal hair. Further, the hair was determined to be that of an animal as was clearly indicated by a unicellular medulla (center cell structure). “Color banding” was also noted. “Color banding” is the change in color of the hair from one end to the other; not uncommon to the mammal fur hair of the Felidae (cat) family. Only a portion of the hair root remained, however, the fibrous appearance of the remaining root is indicative of the Felidae hair.

Other fibers from the matrix material were also evaluated. One of the samples proved to be some sort of plant fiber as the cellular structure was plainly visible.

Another hairlike fiber was evaluated which revealed very unusual characteristics: the shaft of the fiber was long and cylindrical like hair, but revealed none of the other characteristics commonly associated with hair. Along the outer surface of the fiber, angular spines extended from the shaft. The specialists believed this to be some sort of plant fiber but all agreed that they had never seen anything like it.

And finally, one of the fibers taken from the matrix had neither animal nor plant characteristics. The specialists agreed that if this fiber had been collected as modern day evidence, there would be no hesitation in declaring it man-made!

The samples are in the process of being photographed under microscopic enlargement so that this documentation can be shared with other experts around the world. Hopefully, additional conclusions can be reached as to the nature of the unusual specimens that have not been positively identified.

Testing has been scheduled for choice hair samples which are still in the matrix material and with a visible root still intact. There is a remote possibility that DNA information may be present and can be obtained from the remaining root.

Future plans call for carefully proceeding with scientific evaluation using state-of-the-art technology. In the mean time, we can humorously conclude that animals were definitely on board Noah’s Ark!