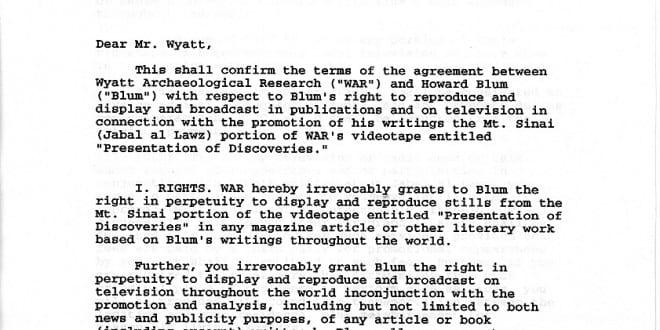 The contract accompanying his first letter

Mr. Howard Blum wrote a book entitled “The Gold of Exodus”, which was promoted as being “true” but which is in fact a fictionalized account of Mr. Cornuke’s and Mr. William’s “discovery” of Mount Sinai.

In an attempt to gain usage of the video footage and photographs we had of the mountain and the evidences, in May of 1997, he called Ron and told him he was writing an article about “Ron’s discovery” of Mount Sinai for Vanity Fair Magazine. He never mentioned his book, “The Gold of Exodus”, which was finished or almost finished at that time, or his association with Mr. Cornuke and Mr. Williams.

Ron told him to send us a letter with his proposal and we would consider it.

Note his comments in his letter (last paragraph) to Ron on Ron’s “going to the mountain and telling the world what you’ve discovered”: When we received this letter, we were obviously not interested in his proposed contract, as he wanted complete rights, which seemed VERY strange to us, considering he said he was only wanting to promote an article he had written for a magazine; an article that would be out one month. Also, we were not aware of articles being promoted in such a manner, so we were somewhat suspicious simply because of that.

So, we returned his check for $500 back to him with a short note stating that we were not interested.

A few months later, we received another call from him inquiring if Ron would reconsider. Ron listened and let him do most of the talking. He inadvertently mentioned “Bob Cornuke and Larry Williams”, although Ron said nothing. But the “red flags” went up for Ron.

Mr. Blum then asked Ron to consider allowing him at least some limited usage of our footage. Ron told Mr. Blum to write a new proposal and send it to us.

When Ron hung up from the call, he told me Mr. Blum had mentioned Cornuke and Williams, and that they “sure wanted our video and photos for something, bless their hearts”. He said, of course, we wouldn’t sign any contract with him, but maybe it would shed some light on what they were up to.

We soon received the following:

Upon reading it, we knew immediately that he wanted the footage and/or photos for more than just a simple magazine article. Read carefully the third paragraph where he specifies usage of any video in conjunction with his “writings on Jabel al Lawz”. This would allow him usage to promote his book, had Ron signed the agreement, which he did not.

Soon, the book was released and became very popular, misleading thousands of people. There was no correlation between the story he concocted and the story Larry Williams wrote in his book.