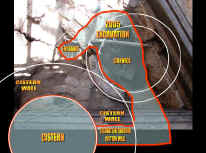 The Ark of the Covenant – The earthly throne of the Almighty and a container for the Ten Commandments, the stipulations of His covenant with mankind, which He wrote in stone with His own finger.

The location of the Ark, unknown for thousands of years, has been the subject of great supposition, among Bible students and archaeologists alike. Is it in a cave on Mt. Nebo? – or perhaps concealed beneath a church in Ethiopia? While the speculation continues, there is one man who claimed to have personally seen the Ark of the Covenant – Ron Wyatt. Ron claimed to have located the Ark in Jerusalem, hidden away in a cave system beneath the Calvary escarpment, an area referenced in the Bible as as the place of a skull, the crucifixion site of Yeshua, Jesus of Nazareth – The Christ, The
Messiah of Israel.

Not only did Ron Wyatt claim to have located the Ark, but he also claimed that the crucifixion took place directly above the location of the Ark – that an earthquake at that time opened a fissure between the crucifixion site and that of the Ark – and that the blood of Messiah flowed down through that crack and on to the Mercy Seat of the Ark of the Covenant. The Bible states that without the shedding of blood there is no remission. Ron claimed that just as the blood of sacrificial animals, the blood of Jesus, the lamb that was slain, literally fulfilled the covenant requirement for atonement.

Ron believed that the Garden Tomb was the actual sepulchre that Jesus occupied for only three days and three nights. That tomb is, as the Bible states, only a short distance from the place of a skull and the site Ron determined to be that of the crucifixion; – therefore his investigations and excavations were centered in and around the area of the Garden
Tomb.

In 1989 those excavations were closed and since that time there has been a great deal of speculation and controversy surrounding his findings – controversy that has caused a great deal of anguish for the Garden Tomb Association – for Ron was not able to validate his claims – he passed away in 1999, leaving no conclusive evidence.

Since that time, we at Wyatt Archaeological Research have been making every effort to substantiate his claims – to provide a second witness that would transform supposition into established fact. In 2002, after having received permission from the Garden Tomb Association and the Israel Antiquities Authority, our endeavor began in earnest. The DVD presentations are summaries of a tremendous amount of work that has been done over the past four years – the most labor intensive and expensive projects ever undertaken by Wyatt Archaeological Research. They are dedicated to our Savior and to the scores of volunteer workers and contributors without whom it would have been
impossible to accomplish this monumental task.

Scripture advises us to Prove all things and to hold fast that which is good. The new DVD presentations are based on that premise. That is the commitment of Wyatt Archaeological Research.