Breaking News
Home » Newsletter Categories » MOUNT SINAI » A statement with photos concerning statements made in “The Gold of Exodus” about a radar station at the mountain; 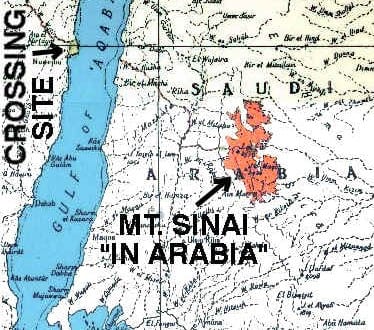 QUESTION– In his book, “The Gold of Exodus”, Howard Blum claims that a radar installation has been built on Mount Sinai, and that the Israelis have missles aimed at it. Is this true?

ANSWER- No. There is a radar station in the range, but it is over 13 kms. to the north of the site. There is nothing secretive about it, either.

These photos were captured from video that was taken a couple of years ago. They show the Jebel el Lawz range from the WEST side (the camp and “holy precinct” are on the east side.) Taken from about 30 kms. away, they show the location of the radar station, the highest peak in the range (technically called Jebel el Lawz) and the blackened peak above the holy precinct.

You can see all this footage in our video, “Discovered- The Exodus”. www.wyattmuseum.com

The photo below this one shows a closeup of the radar station from the same vantage point. Mr. Blum’s book is a dramatization of the Cornuke/Williams tale, but it doesn’t agree with their story as told in Mr. Williams’ book, “The Mountain of Moses”. In fact, there is but a minute resemblance to Mr. William’s book, which was written soon after their trip. Be careful what you believe.