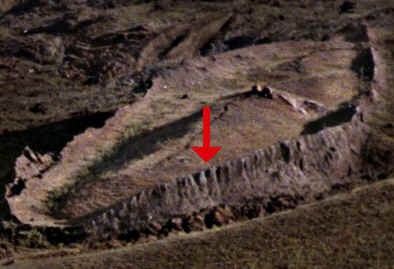 Ron Wyatt returned to the site. What he saw, after the earthquake “looked like a giant shipwreck.” Evenly spaced indentations could be seen all the way around the object, which “looked like decaying rib timbers”. What appeared to be “horizontal deck support timbers” were observed at consistent intervals.. The earthquake had also cracked the object from “stem to stern” and Ron was able to take samples from deep within.

Samples of material outside of the object were also taken for comparison.

Ron measured the object finding it to be 515 feet long. 512 feet, plus 3 feet, the length of a section that had broken off.